Another suburban shopping mall, another transformative mixed-use master plan. Following a growing trend across Toronto, QuadReal is in the process of putting together a comprehensive redevelopment of Cloverdale Mall that could transform it into a mixed-use, pedestrian-oriented community complete with thousands of new residents, a neighbourhood park, and plenty of new, reimagined retail. Compared to some others, however, this master plan seems to be headed in the right direction: the preliminary scheme was presented to the Toronto Design Review Panel at their latest session, who called it a “masterful example of mall transformation”. 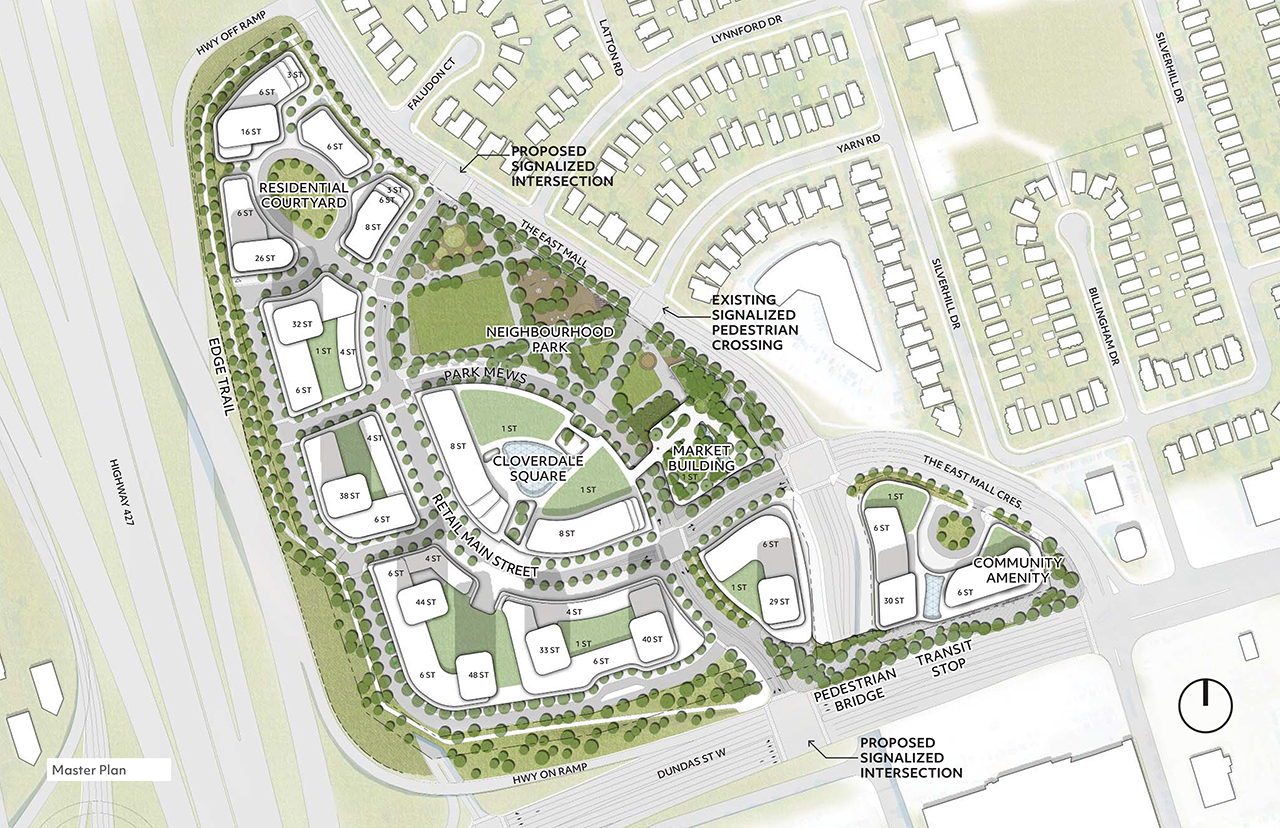 Proposed Cloverdale Mall master plan, image via submission to the City of Toronto.

Located on a very impressive site, Cloverdale Mall is bordered by The East Mall, Dundas Street West, and Highway 427, with the cloverleaf interchange of Dundas and the 427 at its southwest corner. The redevelopment plans would replace the existing mall and surface parking lots with a complete community, looking to urbanize the under-utilized site with a new street grid and a pedestrianized public realm. The master plan is being drafted by a team including Giannone Petricone Associates as architects, Urban Strategies as planners, and Janet Rosenberg & Studio as landscape architects, among others. 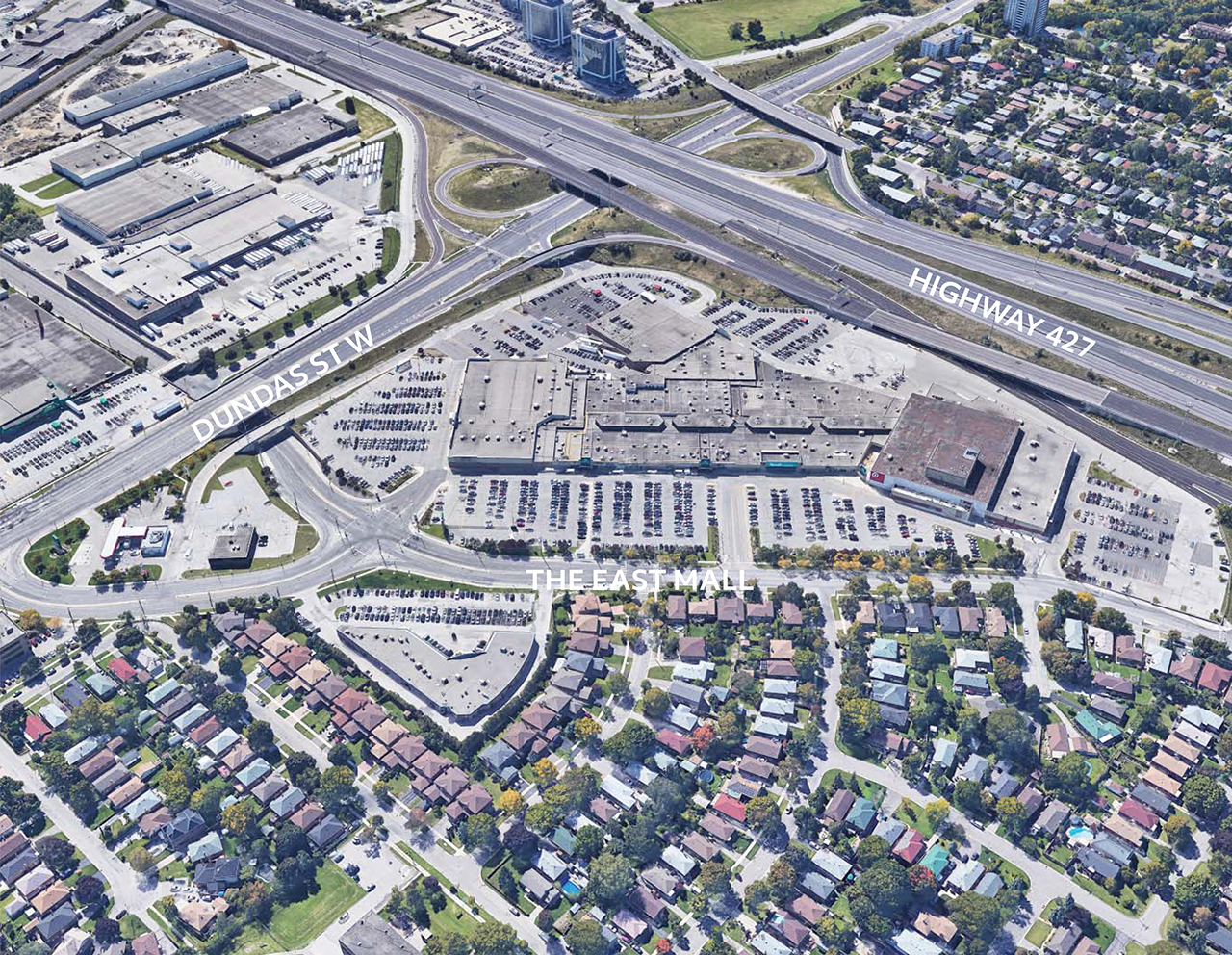 View of the existing Cloverdale Mall, image via submission to the City of Toronto.

Before we delve into the details of the development and Panel commentary, it should be noted that the plan is still in the pre-application phase, and therefore all conceptual renderings and images showing massing and materials are indicative and may be adjusted as the plan evolves.

There are four main aspects that comprise the design team’s vision for the site. The vision focuses on enhancing the public realm and community amenities, providing plenty of green space and a new community amenity while emphasizing pedestrians; embracing mixed-use, which includes a mix of housing typologies as well as a variety of residential, commercial, and community programs; and pursuing excellence in sustainable community design. They have also established the goal of redefining the retail from a regional shopping mall experience to a more neighbourhood retail experience, incorporating locally-focused food and beverage, convenience, lifestyle, and micro-retail, while also including major anchor tenants. 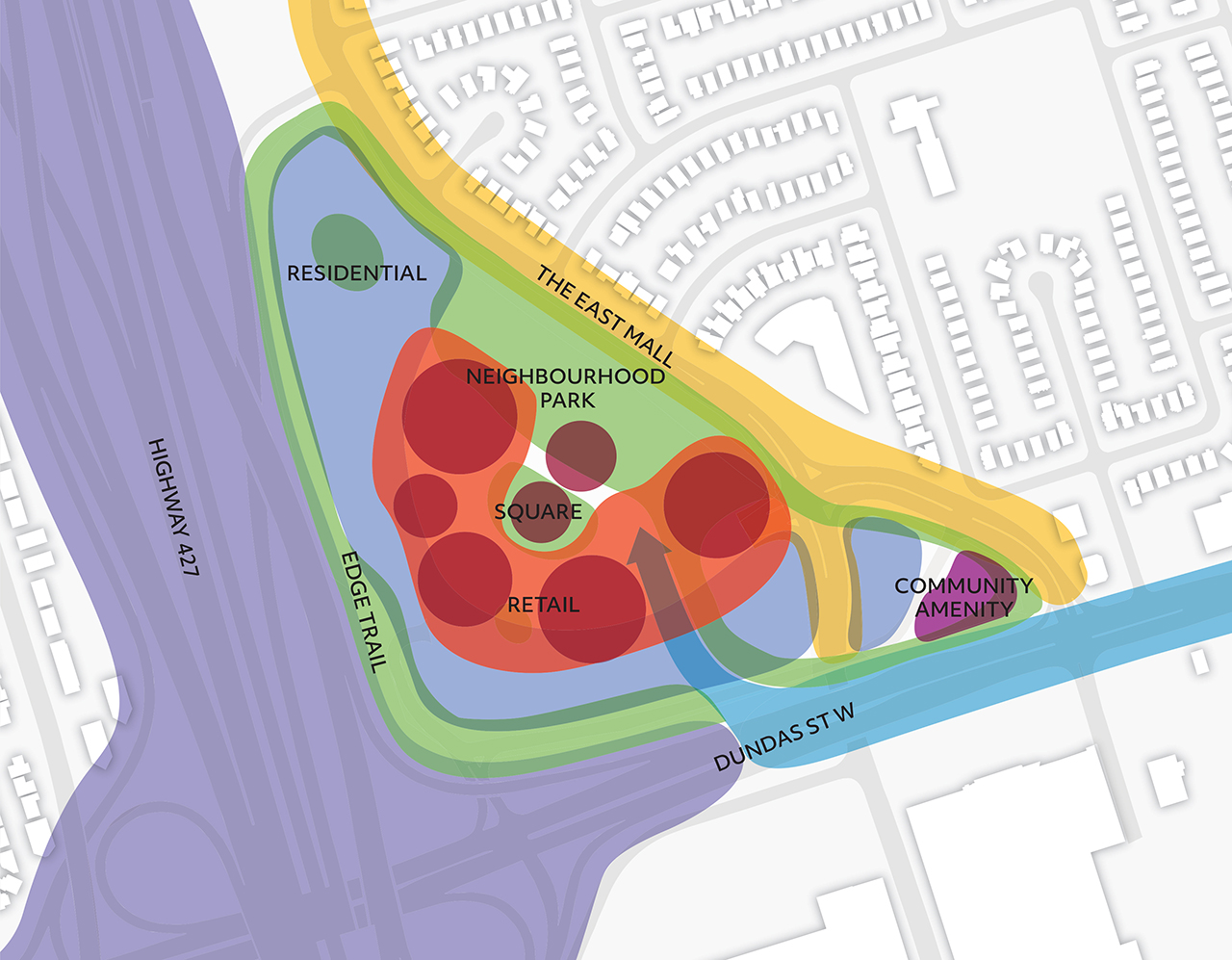 Diagram illustrating programmatic areas of the master plan, image via submission to the City of Toronto.

An organic street grid is overlaid on the property, centred around a retail main street that forms a crescent through the middle of the site, connecting at both ends to The East Mall. Smaller streets feed off of this, dividing the property into development blocks, with another major street proposed to the south to connect with Dundas. The streets within the block will be designed with pedestrians in mind, with landscaped streetscapes and plenty of active uses at ground level. 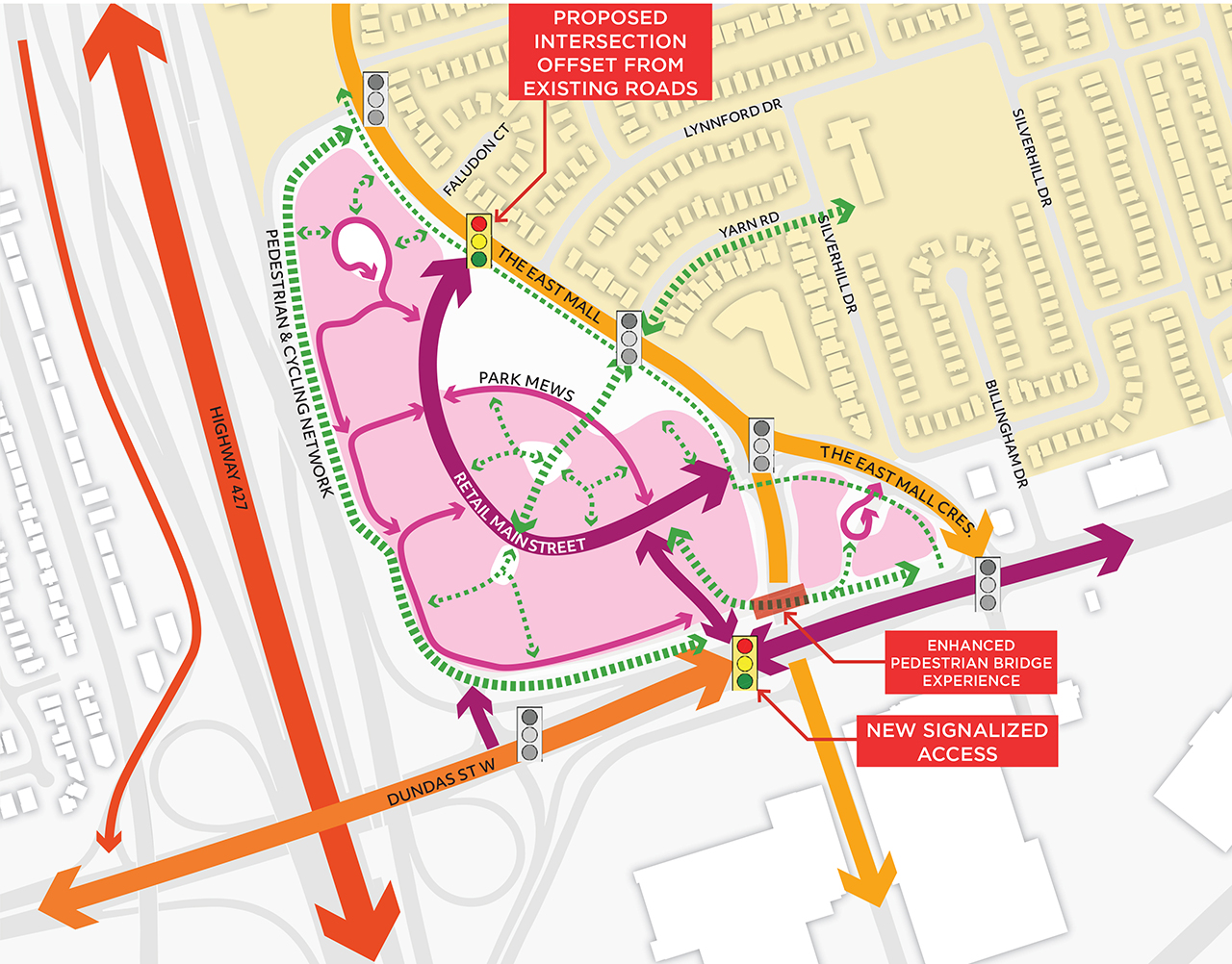 Diagram illustrating proposed street network, image via submission to the City of Toronto.

The existing edges of the property are essentially defined by high-speed traffic barriers, with a low-rise suburban neighbourhood located to the east. The new south street providing access to Dundas is planned to have a lighted intersection to take pressure off The East Mall as the primary access road while calming traffic along the highway-like Dundas just before it reaches the interchange. The design team hopes this will create a more urban frontage along Dundas, particularly with the addition of a new community amenity at the southeast corner of the site. The underpass where The East Mall tunnels below Dundas and continues south will be maintained.

The community amenity is located at the corner of Dundas and The East Mall Crescent, and looks to anchor the site with a prominent building at this major intersection. The program for the community amenity is not yet defined, but the proponent team is considering an arts and culture centre geared toward the local community. 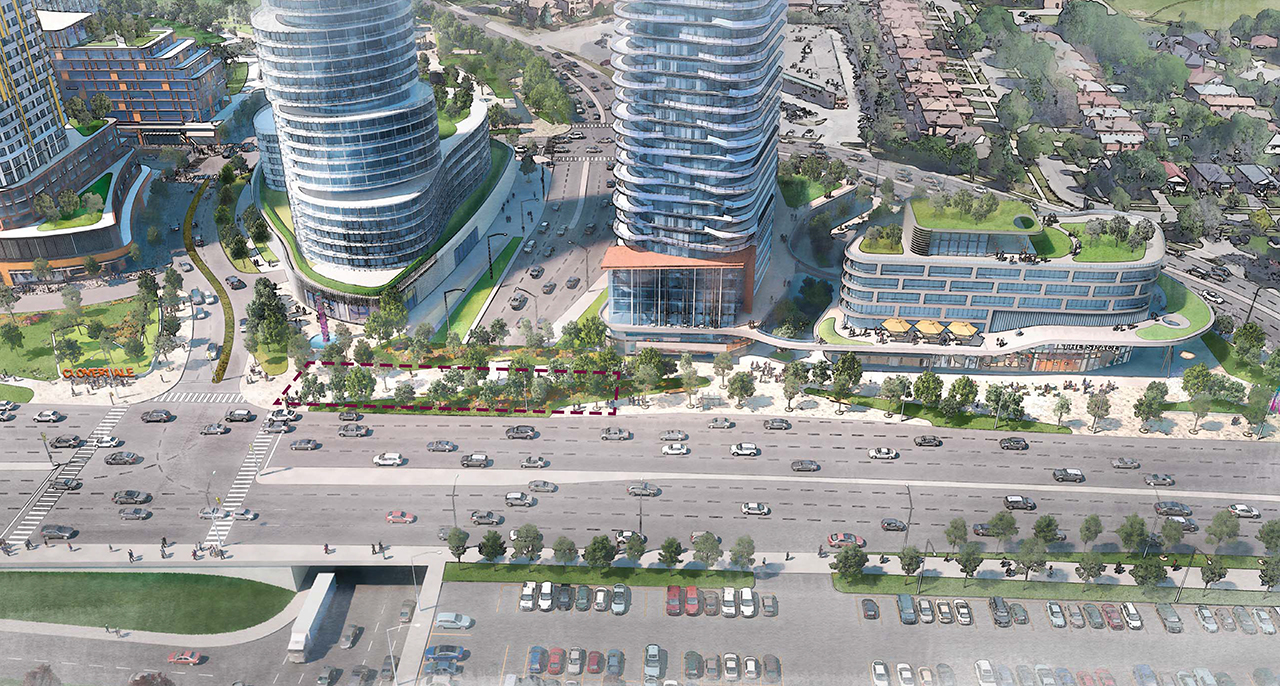 Conceptual rendering of Dundas Street, image via submission to the City of Toronto.

Filtering through the site is a network of green spaces anchored by a large neighbourhood park to the east. The park takes up several acres of the site area, and will contain both passive and actively programmed spaces. It is also proposed to contain a new food market building at its south end, with a landscaped sloping green roof that merges the building with the park. 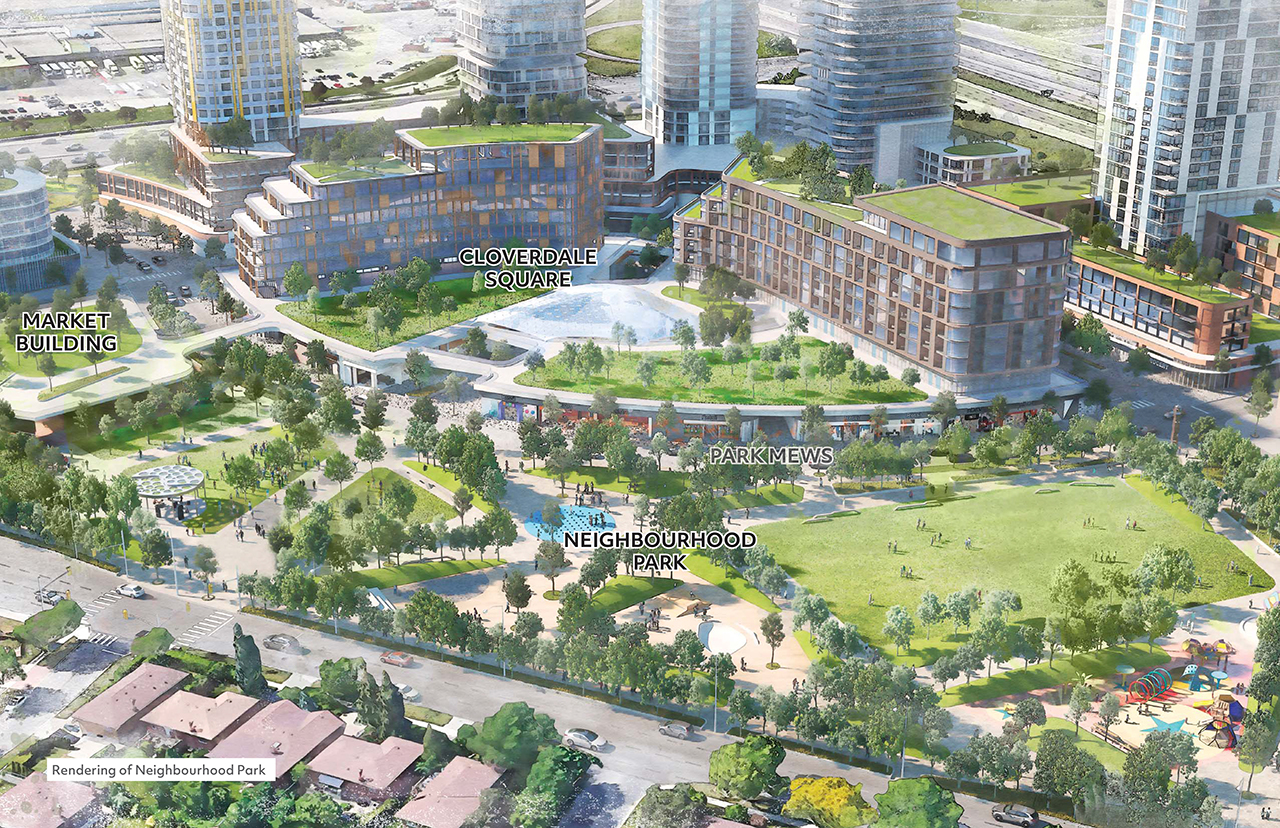 Rendering of the park and retail block, image via submission to the City of Toronto.

The neighbourhood is also proposed to be encircled by linear green spaces, with a new green promenade along The East Mall, and a new ‘Edge Trail’ along the south and west borders of the site within the required highway setback of 14 metres. Further green spaces are provided for with courtyards and roof terraces in the built form. 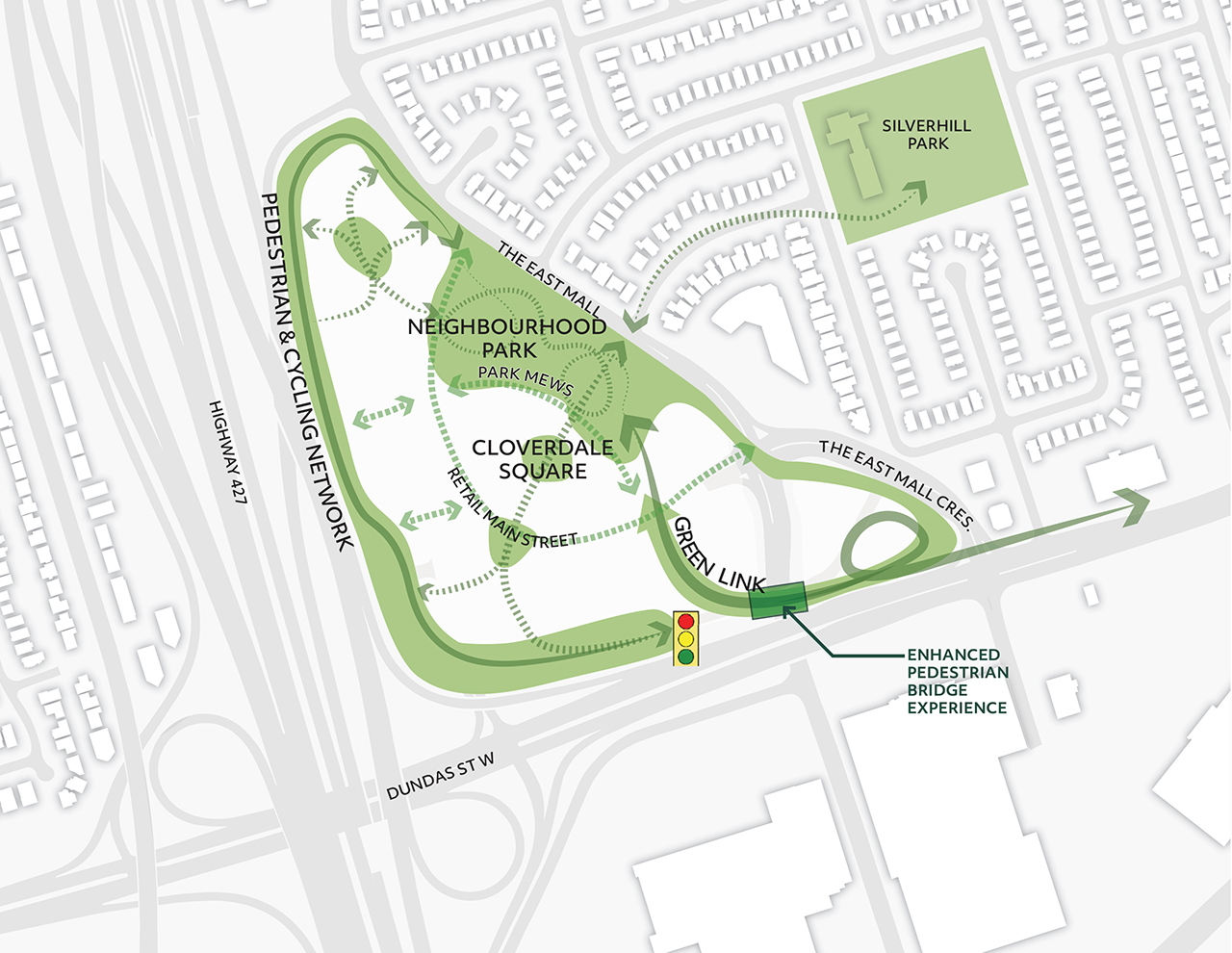 Diagram illustrating the green space throughout the master plan, image via submission to the City of Toronto.

The built form being proposed is significant, but not out of character for the density boom happening along the 427 corridor. A total of 10 towers are proposed, ranging in height from 16 to 48 storeys. The towers are arranged along the south and west edges of the site, closest to the highway, and will sit on 4-to-6-storey mid-rise podiums. Generous separation distances are given between the towers that far exceed the City’s 25-metre minimum. 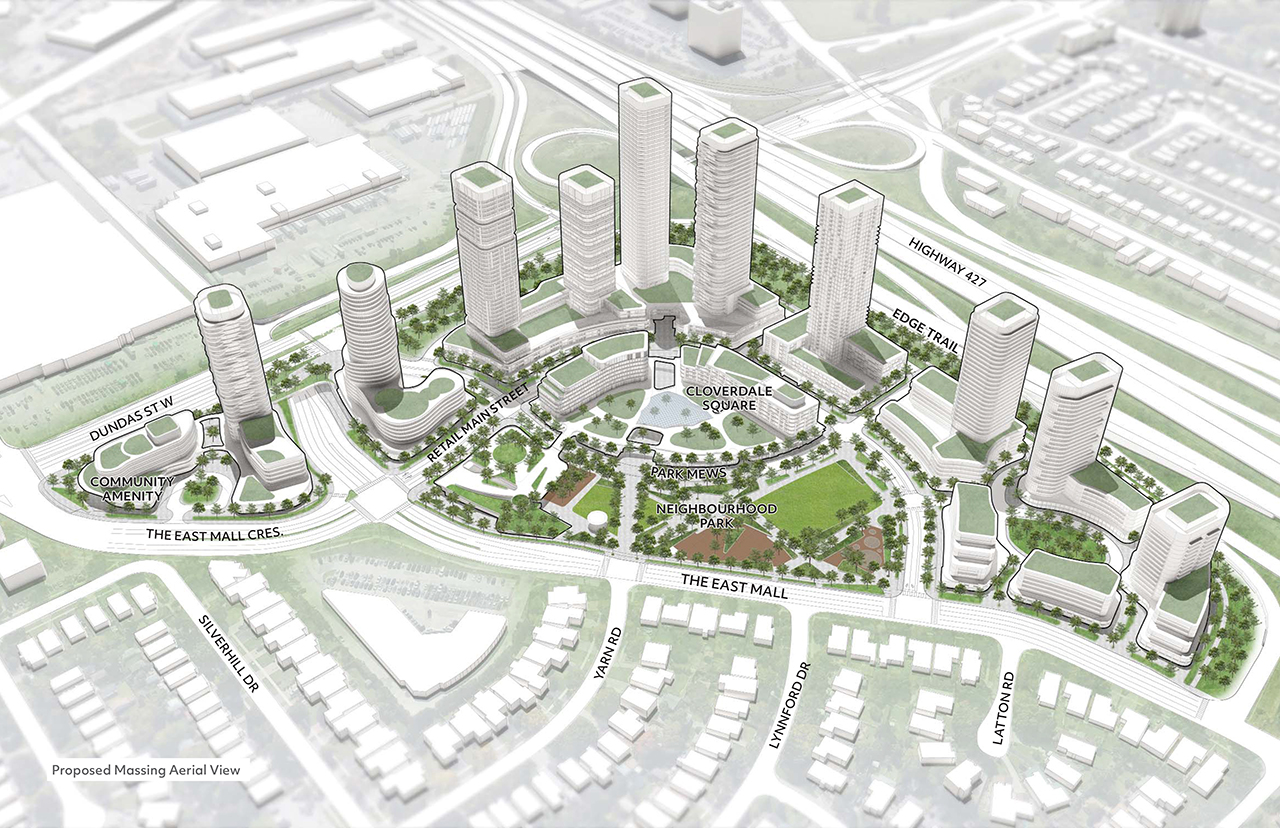 Aerial rendering of Cloverdale Mall redevelopment, image via submission to the City of Toronto.

In the central block, the design team imagines a ‘Village on the Park’ complex, with a one-storey retail building framed with two 8-storey mid-rises along the south and west edges. The central block is porous with open-air pedestrian walkways lined with retail that lead to a central covered gathering and event space dubbed ‘Cloverdale Square’. The retail complex spans between the retail main street and the public park. 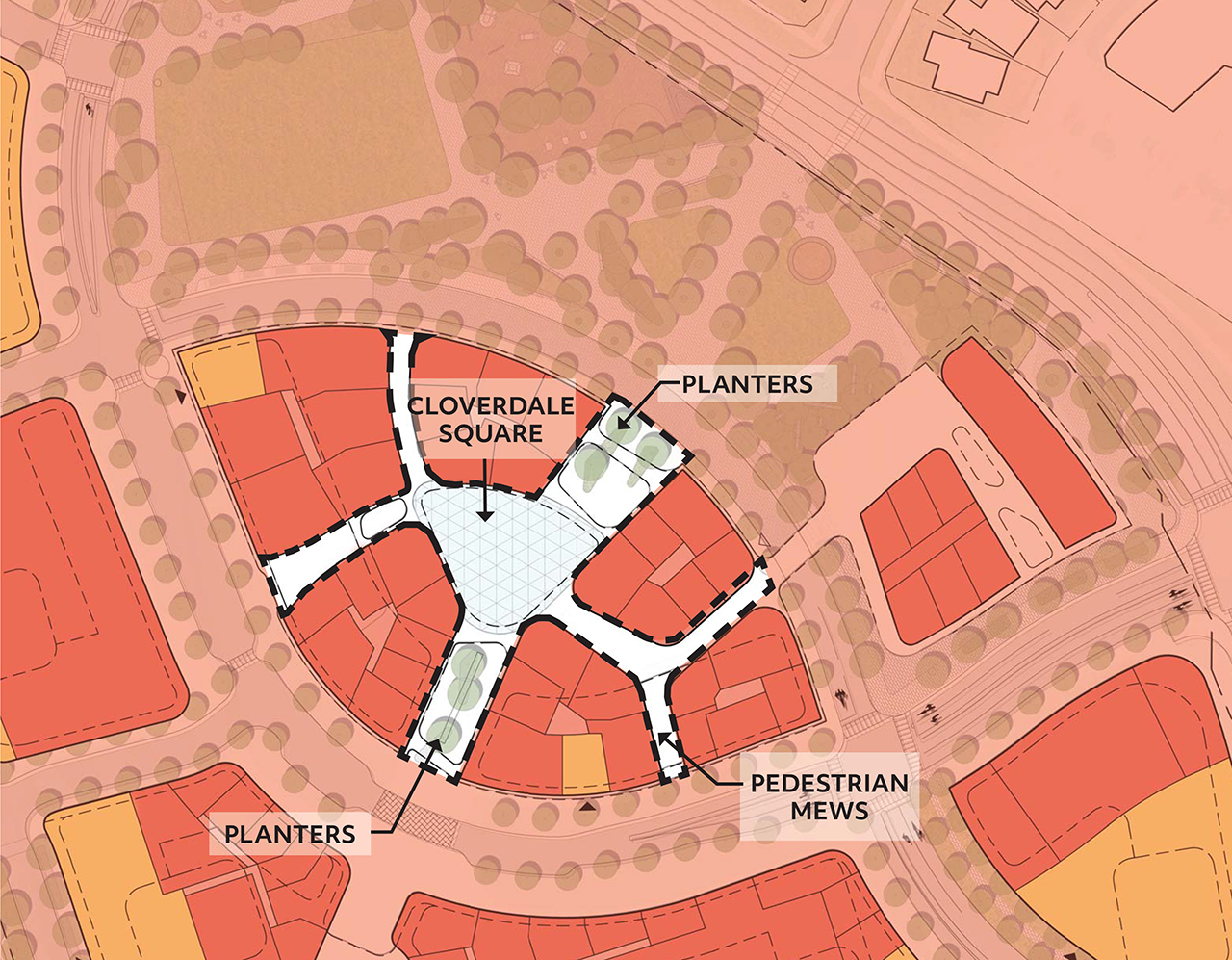 Diagram of the central retail block, image via submission to the City of Toronto.

The Panel was impressed with the level of detail and amount of work presented, congratulating the design team on their progress thus far. They were quite happy with the layout, saying that there was “a ton of things to admire about this project” and that it was a “terrific example” of how to transform a post-war mall site. Panelists were encouraged by the street network, mix of uses, small-scale retail focus, and integration of green spaces. They did, however, point out several areas that the proponents could focus on to improve upon the master plan. 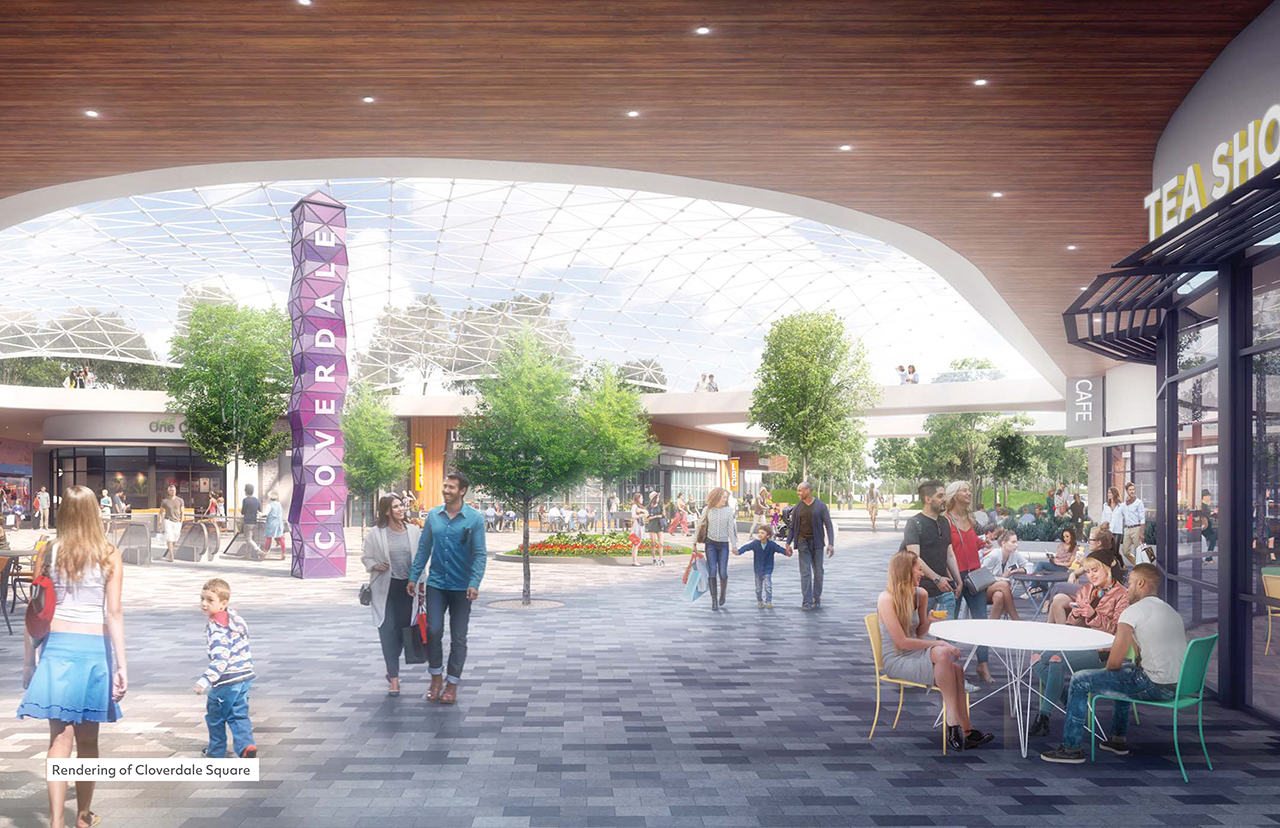 Conceptual rendering of Cloverdale Square, image via submission to the City of Toronto.

A suggestion raised by the Panel was to think outside the podium-and-tower form in terms of the building typologies and massing. They all agreed that the amount of density proposed was reasonable, but that “the issue is how you deliver [that density] in what built form and what location”. They encouraged the design team to explore “innovative mid-rise forms” to avoid the typical “tower clutter” lined up along the edges, and to be more strategic in the massing and placement of the buildings in order to “provide a diversity of character”. 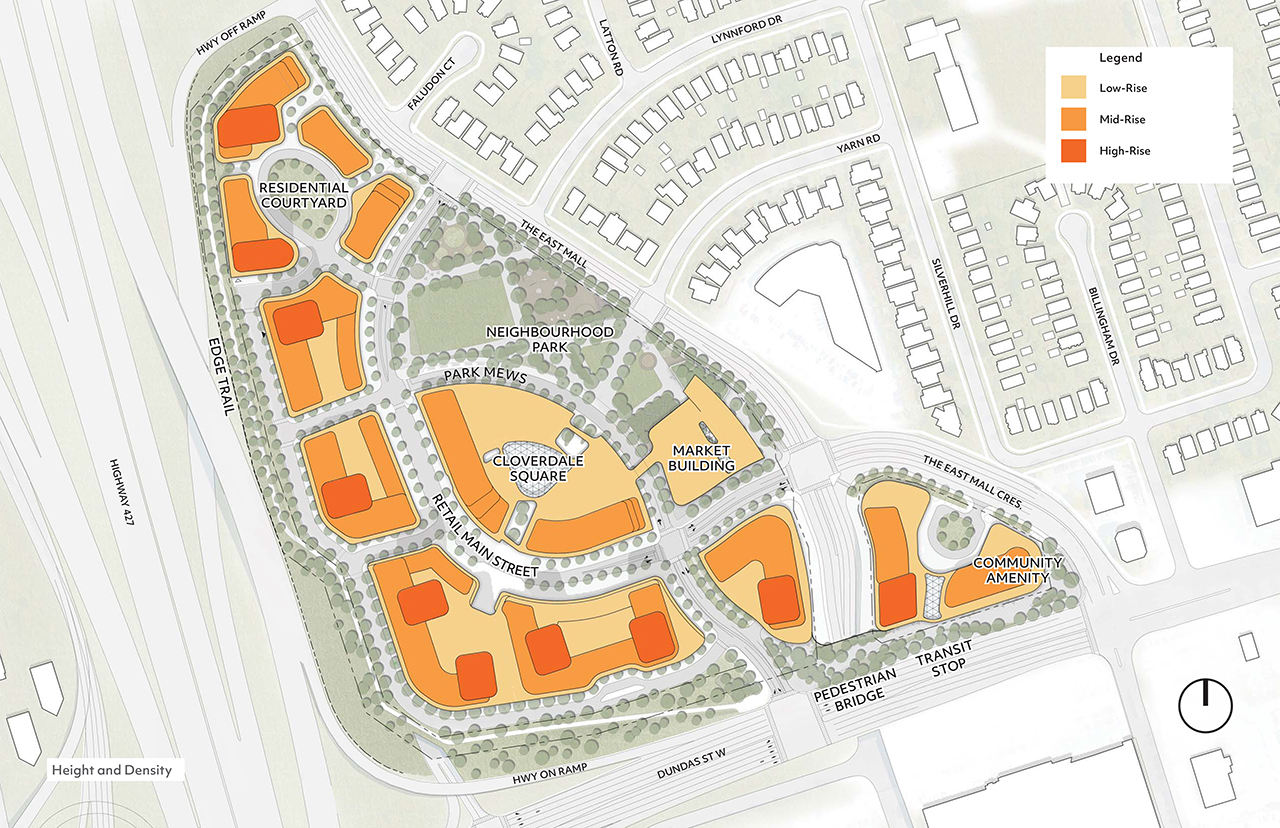 Site plan showing building heights, image via submission to the City of Toronto.

Panel members praised the amount of green space proposed, and applauded the design team on the fact that the new park would be shadow-free for most of the year. They liked the idea of the Edge Trail, though some Panelists cautioned that the design of it would be tricky given the highway conditions. As well, they appreciated the effort to pedestrianize the streetscapes, though they cautioned that some of the roads seemed a bit too wide. 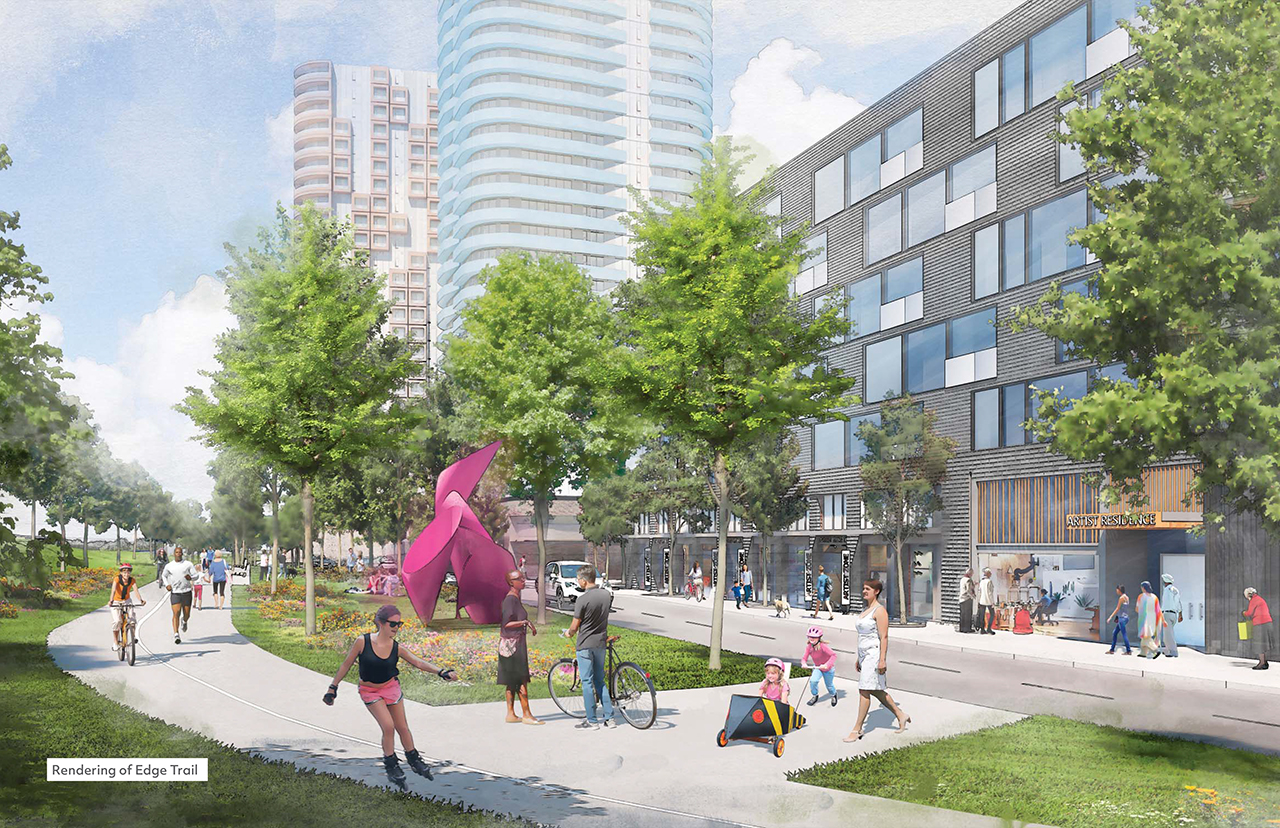 Conceptual rendering of the Edge Trail, image via submission to the City of Toronto.

A common issue that came up which could have a major impact on various aspects of the project was phasing. While the vision of the final product proposed was clear, Panel members questioned what would happen in the interim as the master plan gets built out, and whether this may impact the success of the retail, public realm, community amenities, or sustainability goals. No phasing strategy has yet been developed by the proponents.

The design team was also urged to push the sustainability aspects of the project even further, with suggestions to consider a district energy plan to help mitigate the carbon footprint, and to think about potential future sustainability standards like Toronto Green Standard Tiers 3 and 4. The issue of the lack of transit was also raised, as one Panelist cautioned that it could risk becoming another “auto-oriented vertical suburb”. The design team did point out that they have proposed a bus stop at the new lighted intersection along Dundas, and are designing the new street grid to allow for a future bus loop through the site if the TTC wishes to implement one. 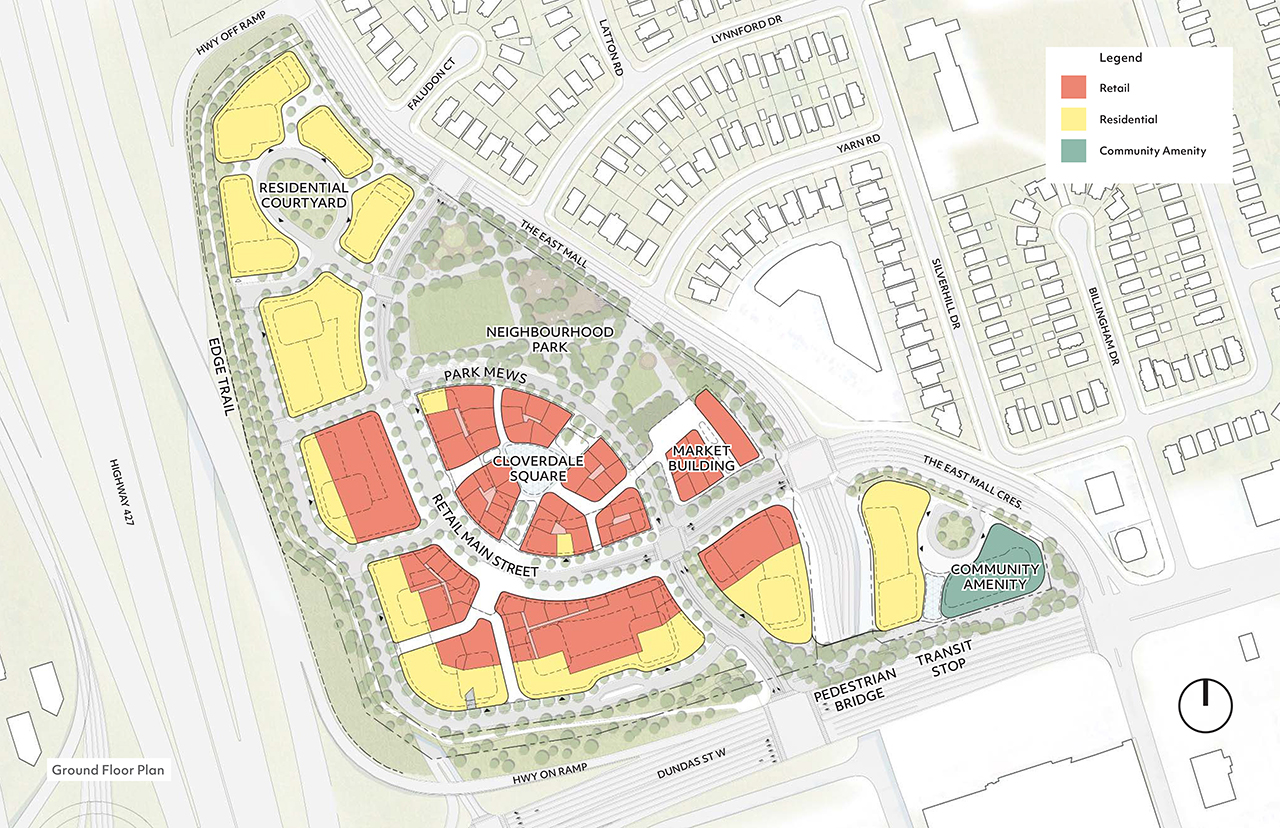 Proposed ground floor plan and uses, image via submission to the City of Toronto.

The Panel also reiterated their common critique of building communities adjacent to major highways, asking how noise and air quality are being mitigated. The design team acknowledged that these issues are being taken into consideration but are not yet resolved, and the Panel urged them to further explore solutions through the built form, layout, and public realm design.

In the end, the Panel was very encouraged by what they saw and were pleased with the direction the master plan was headed in. They encouraged the design team to push their ideas further, saying that this site has a huge potential to become an exemplar for the many mall transformations to come. There was no vote held at the end given that this was a pre-application presentation. 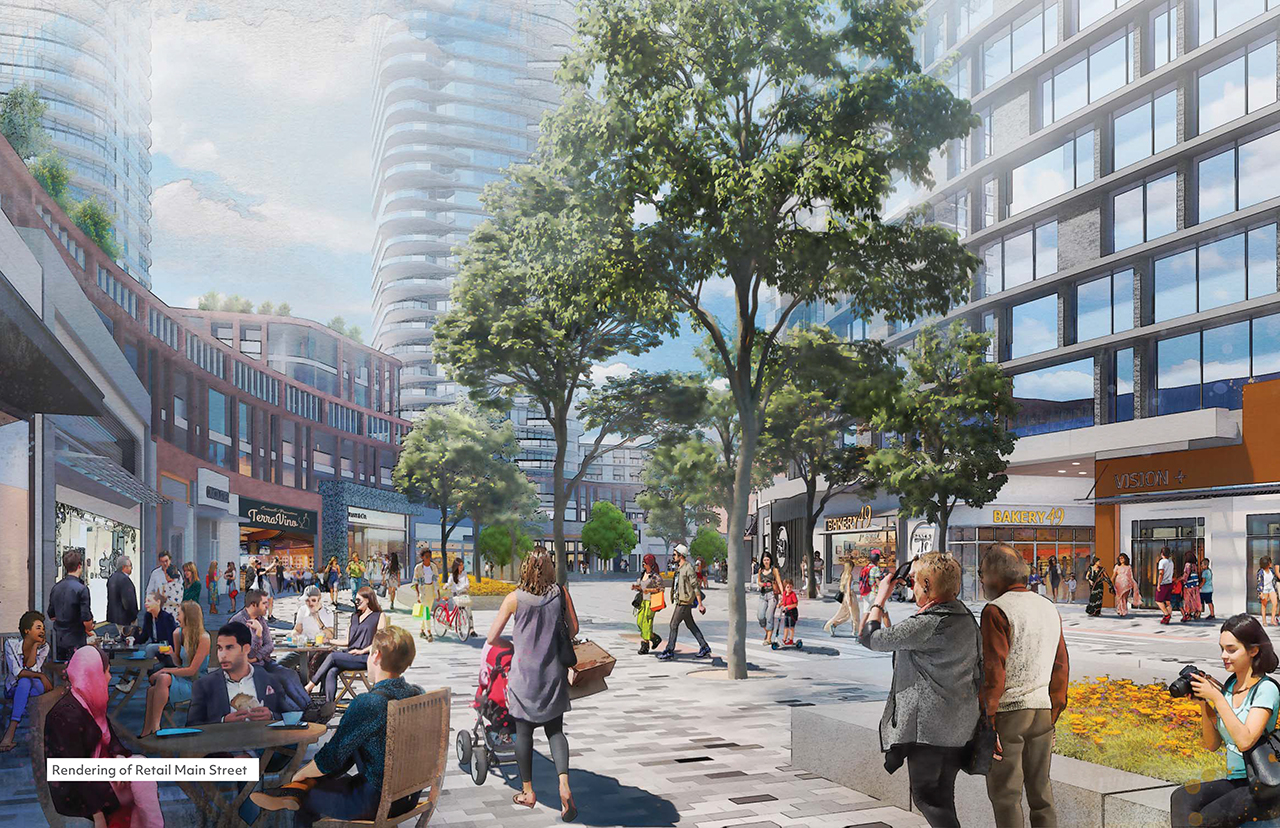 Conceptual rendering of the retail main street, image via submission to the City of Toronto.

Once the initial framework of the Cloverdale Mall master plan is finalized, the project will be submitted for rezoning, likely sometime in early 2020, at which point we will know more about the statistics and details of the development. In the meantime, QuadReal has been carrying out extensive community consultations and is taking feedback on the design. You can get involved in the process by visiting their on-site engagement and arts and culture space, Cloverdale Common, or by visiting the project website here.