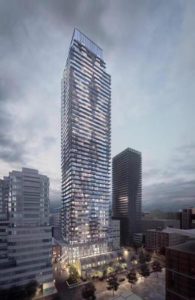 Theatre District Tower is a new condo project by Plaza Corp currently in Pre-Construction at 8 to 20 Widmer Street in Toronto. This new condo is in the Toronto Entertainment District.This project offer the most investor and end-user friendly price per square foot with prices starting from the $362,500.

The world-class developers at Plaza recently filed an application for to develop a next-generation condominium high-rise in Toronto’s downtown Theatre District. Currently known as Theatre District Condos at 8 Widmer, the proposed project consists of a streamlined skyscraper comprised of two elements: a classic podium base  and an upper tower for a total of 49 Stories. The building’s distinctive design will be created by Quadrangle, an acclaimed architecture studio based in the same Toronto neighbourhood as the tower’s future site. Though the project is currently in the early stages of development, it is already shaping up to be a signature landmark in Toronto’s bustling Theatre District.

King West is known for district landmarks like the Financial District, the Entertainment District, and the Theatre District, and they are all just a few reasons why this pocket of downtown Toronto is buzzing, day and night. Enjoy this location’s perfect Walk Score of 100/100 by visiting nearby attractions, such as The Rogers Centre, The Air Canada Centre, Ripley’s Aquarium, tons of popular pubs and delicious restaurants.

Theatre District Condos will occupy a premium location in Toronto’s exclusive and highly sought-after downtown core. It will be located just one block north of the heart of Toronto’s renowned theatre district, which is often ranked alongside London and New York as the best in the world. The site is also contained within the city’s entertainment district, a feature that offers residents endless nightlife options and easy access to an amazing array of restaurants, eateries, pubs, bars, and nightclubs.

The Theatre District Tower will have no shortage of amenities. You’ll get;

Future residents will also be within easy walking distance of Toronto’s Eaton Centre, as well as the eclectic and exciting array of shops and boutiques that line Queen Street 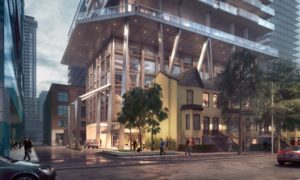 West. All the city’s major sports and entertainment venues are close by, including the Rogers Centre, Air Canada Centre, BMO Field, and Ricoh Coliseum. The Four Seasons Centre for the Performing Arts, City Hall and Nathan Phillips Square, Dundas Square, Queen’s Park, Ryerson University, and the University of Toronto highlight the long list of other major city attractions in the area.

The St. Andrew and Osgoode stations on the Univeristy-Spadina branch of the TTC subway’s Line 1 are reachable on foot within minutes, and residents also enjoy easy access to east-west streetcar service on King Street and Queen Street, as well as north-south streetcars on Spadina Avenue.

This outstanding proximity to multiple transit options is supplemented by the site’s location near entrances to the Gardiner Expressway and Don Valley Parkway. From these thoroughfares, drivers can easily reach Pearson International Airport, the Queen Elizabeth Way, and Southern Ontario’s extensive intercity network of 400-series highways.

While Toronto’s central core has been dramatically reimagined in recent years through the construction of multiple residential projects in its historically underdeveloped waterfront areas, condominium units in the city’s traditional downtown hub remain in extremely high demand. Residential suites in these parts of Toronto tend to post outstanding rates of appreciation, creating the potential for excellent financial returns and making Theatre District Condos especially appealing to investors.

Founded in 1982, Plaza was one of Toronto’s first condominium developers to prioritize the standard use of

premium interior building materials like granite, marble, engineered hardwood, porcelain, and stainless-steel appliances. While no details about the interiors of Theatre District Condos’ residential suites have yet been made public, would-be owners can expect these high-quality constituents to be included in their units. Plaza has a long track record of furnishing its suites with these materials at no extra cost.

Plaza-built residential communities can already be found in desirable Toronto neighbourhoods including Yorkville, King West, Queen West, Mount Pleasant Village, St. Lawrence Market, the Harbourfront area, among others. In total, the company has led the development of over 5,000 condominium units in the GTA.

Quadrangle is one of Toronto’s top-rated architecture studios. Founded in 1986, the company is headquartered on King Street West, not far from the future home of Theatre District Condos. This gives the firm advanced insights into the neighbourhood’s character and distinctiveness, adding yet another asset to its already impressive track record of solution-oriented innovation and design excellence. The company’s portfolio includes bold, unique, and revolutionary buildings in many high-profile locations throughout the city and its suburbs.

We will answer all your questions and work through the numbers with you. E: samuel@starionrealty.com | P: (647)449-4114 | Register to get Prices, Floor Plans and the Brochure.

Register for Theatre District Condos today and ensure you are first in line to receive promotional package, special incentives, price list, floor plans and the widest selection of suites to choose from at the lowest entry price in advance of general realtors and the public. You will receive *Direct & Early Access* to the best floor plans and pricing along with *Priority Unit Allocation* Access & Secured Allocation you simply cannot get by going direct.