Rising on the shores of Toronto’s waterfront, Sugar Wharf is a community of extraordinary proportions 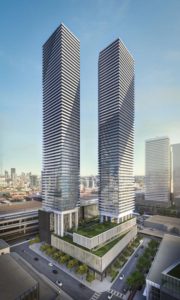 From Humber Bay to the Eastern Beaches, Toronto’s magnificent waterfront spans 46 kms. Under the direction of Waterfront Toronto, this highly desirable section of the city is undergoing a sea change. Created by the federal and provincial government and the City of Toronto, Waterfront Toronto has the mandate to transform the area into a vibrant public and cultural space for all Torontonians. By adopting an economically and environmentally sustainable design approach, this reimagination will change the face of Toronto and deliver a positive, meaningful relationship between the lake and the city.

A Community of Extraordinary Proportions

Sugar Wharf is a community of extraordinary proportions. Striking the perfect work-life balance, this exceptional development will be the future-forward ideal today’s urban population seeks. Home to 7,500 residents, and 4,000 office workers once completed, this 11.5-acre community offers homes, offices, shops, restaurants, school, daycare, park and more. Equally connected to the city as it is to nature, Sugar Wharf will revolutionize the way Torontonians live and work. Unequalled in size, it’s one of the largest urban revitalization projects in the world. The total area for development is 800 hectares in size, and is one of the largest revitalization projects in the world! Collaborating with developers like Menkes, Waterfront Toronto aims to create 40,000 new residences and approximately 40,000 new jobs. With the introduction of mixed-used neighbourhoods, offices, expanding public transit, parks, and public spaces, the waterfront will be a coveted place to live, work, learn and play.

A Deep Pool of Investment Reasons
Toronto’s waterfront revitalization is the latest piece of the city’s rebirth as a hub of creativity. With the goal to be transformative, this corridor of vitality will be the home of new approaches, new technology, new solutions. A perfect example of people-centric urban planning, the waterfront will offer a radical mix of residences, offices, retail and maker spaces. While these alone are compelling reasons to invest at Sugar Wharf, it’s also important to see how big this picture really is. PATH extension and the new Waterfront Transit Network Plan will connect residents and office goers alike to all parts of the city seamlessly. A Place of Diversity

Often referred to as the ‘most multicultural city in the world’, Toronto’s the top choice for new immigrants. According to the Census 2016 in Canada, 40.4% of immigrants made Toronto their new home.

Future Ready Communities. Among the many futuristic communities that will rise, Downtown Waterfront will also be the home of Sidewalk Labs’ smart city, an innovative, mixed-use, complete community.

Generating almost 10% of Canada’s GDP, the fifth largest city in North America, Toronto with its exceptional educated workforce and favourable location in a vibrant technology and manufacturing corridor is an economic tour de force.

Toronto’s waterfront transformation will define the future of the city. Like Sugar Wharf, its many sustainable, well-designed communities and modern infrastructure will set this neighbourhood apart. It will be a destination to live, work and play. And transit will play a defining role in this grand reimagination. With its unbeatable location and proximity to transit, Sugar Wharf TD will attract both residents and workers. Starting with its direct access to the PATH and the introduction of a Waterfront Transit Network, life here will be well connected

With its driven entrepreneurs, digital wizards, next-level accelerators and deep-pocketed venture capitalists, Toronto is experiencing an unprecedented growth in the tech sector. It’s Canada’s largest, most dynamic and innovative hub of technology-focused businesses

WHY LIVE OR INVEST AT SUGAR WHARF CONDOS? The highly anticipated reconstruction of the LCBO Headquarters on Queens Quay will boast a total of 6 towers in the completion of the new community called Sugar Wharf. The first residential high-rises, Sugar Wharf Condos, will stand at 77, 87 and 90 storeys tall and will feature 1,927 suites.  Developed by Menkes Development and designed by architectsAlliance, this community named in unison with the Redpath Sugar Factory located across the street and the popular nearby attraction; Sugar Beach is set to be the sweetest addition to Toronto’s Lower Yonge Precinct Area.

Phase 1: Two residential towers will rise at 95 Lakeshore Blvd. This phase will include a new 25-storey LCBO headquarters office tower, a park, and a new low-rise retail building.

Located just east of Yonge and Lakeshore Blvd E. this area is coming into its own. This strip of Lakeshore, formally known for its majestic harbour and industrial flair is now on its way to adding a buzzing residential and retail hub to its resume.  This architectural blueprint will be anchored by the rebuild of the LCBO headquarter and storefront as well as thousands of retail/commercial space. Not to mention, the complex will be connected through an extension of Toronto’s PATH, the largest underground pedestrian-only retail path in the world.

Boasting a walk score of 95/100, 9-minutes on foot will get you to Union Subway Station and the Go Transit. At your doorstep, the 75 Sherbourne bus will take you to the Bloor- Danforth subway line in under 20 minutes and the 504 King Streetcar runs 24 hours-a-day, 7 days a week.

Additional nearby transportation: Via Rail and the Up Express to Pearson International Airport.  For driving in and out of the city along Lakeshore Boulevard East, the Jarvis on/off ramp via the Gardiner Express Way is conveniently a few meters from home. George Brown College students will enjoy short walks to both the Waterfront and King street campuses and by using effortless TTC routes, Ryerson and U of T students can be at school in just under 20 minutes.

Don’t miss out on this once in a lifetime opportunity to reap the rewards of living on Lake Ontario with spectacular views of the city’s waterfront and harbour. This is your chance to invest in a property created to add to the landscape of new developments under the Lower Yonge Precinct Plan (this planning project created to address the significant population growth expected for the area will attract a diverse audience). With upcoming schooling, retail and restaurant expansions in the Lower Yonge Precinct Area, this project is Menkes development’s most widely accommodating condo yet! Sugar Wharf is being developed by Menkes. Menkes Developments has a 60-year history and is well-known to be a top developer in Toronto with outstanding quality. Menkes has just completed the Harbour Plaza Residences at 88 and 100 Harbour Street. The Harbour Plaza Residences is located just south of the Air Canada Centre and features a direct indoor access to the Union Station and the PATH.

THIS PROJECT IS NOT YET OPEN TO THE PUBLIC

Contact us to get first platinum access to this project in order to secure your unit ahead of the crowd with significant price savings. We will answer all your questions and work through the numbers with you. Register to secure a unit, get the price list, floor plans and brochure E: samuel@starioncondos.com | C: (647)449-4114